Enter your email address to keep up to date with the very latest news and events from the Belfry Shopping Centre.

You have successfully signed up for our newsletter! Please check your inbox to confirm your subscription.

Andy Nash, our Centre Manager at the Belfry, receives a surprise honour from the Mayor! 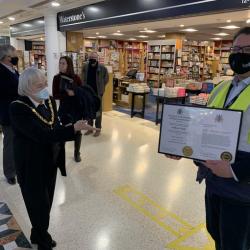 Andy Nash, the Belfry’s Manager, has received a surprise honour from the Mayor of Reigate & Banstead, Cllr Rosemary Absalom, a Testimonial and thanks in recognition of his dedication in supporting the community, good causes, business and individuals.

The surprise gathering had been excellently coordinated to catch Andy unawares whilst he was just going about his job at the Centre so that he could be presented with the Mayor’s Testimonial & Citation. This tribute from The Mayor of Reigate & Banstead was in thanks for Andy’s near decade of work leading the Belfry, as well as for the support he has given to local businesses, his work with many local voluntary organisations and charities, and the hundreds of thousands of pounds raised for good causes over the years.

Andy recently took on a role as Chairman of The Redhill Business Guild, and the tribute also recognised his organising of the town’s Christmas Decorations, the annual Armistice Day Remembrance Service and poppy drop, annual Carols in The Belfry and many of Redhill’s other key events (such as the Christmas Grotto & Drive-In Movies). It also acknowledged his efforts to ensure that the Centre and its retailers have been able to continue operating under strict health and safety guidelines, so safeguarding jobs as far as possible, while supporting many hard-pressed local charities, community groups and individuals throughout this most challenging year.

Andy said, “I am delighted to receive this award – it was certainly unexpected! I would like to also accept it on behalf of the incredibly hard-working team here at the Belfry and all our retailers. This year has been tough, and many of us are often working around the clock to make sure that customers have a safe and enjoyable experience when they do visit.

“Christmas at the Belfry is traditionally a special time for everyone, and we’ve always assisted local charities and community groups where we can, often in innovative ways with publicity and fundraising at the Centre. So we are especially glad to be able to host a Santa’s Grotto again this year supporting the Children’s Trust, as well as our inaugural festive Drive-In Cinema when so many Christmas events around the country are closed.

“Please do also look out for and drop an extra item into the trolleys near M&S to help our on-going collections for Redhill’s Foodbank, or please pop a small donation to our collection for VARB’s Festive Feast delivering out Christmas Dinners locally, or you could help with a present from Stripey’s Santa Stork gift list with Toy Barnhaus when you pick up your Christmas shopping in the Belfry this December!”